The youngest of the four Irish lodges in New Zealand, is Lodge St. Patrick. Irish freemasonry came into existence in Otago on 29th March, 1866, when the Shamrock Lodge, No. 448, was opened in the Masonic Hall, Princes Street, Dunedin, under Dispensation from the Provincial Grand Lodge. Prominent among those promoting Irish freemasonry in Dunedin were Bro. T. S. Graham, of Lodge St. Patrick, Cork, County Cork, Ireland and Bro. C. White, of Lodge 424; Belfast. Bro. White was installed as first Master of Shamrock Lodge, with Bro. Graham as Senior Warden. The discovery of gold in Otago around about that time caused the population of Dunedin to fluctuate wildly, and this no doubt had an influence on the activities of the Dunedin community. Within five years Lodge Shamrock ceased to function and for a decade no Irish Lodge met in Dunedin until, on 21st September 1881, a preliminary meeting was held for the purpose of forming a lodge under the Irish Constitution. W.Bro. Graham, who had been a founder of Shamrock, chaired this meeting. The assembled Brethren resolved that a Lodge bearing the name “St. Patrick’s Lodge” be formed and also that W.Bro. Graham should be its first Master with W.Bro. Kerr as Senior Warden and Bro. Blanchard, Junior Warden. The Dispensation issued by Provincial Grand Lodge under the hand of R.W. Bro. Pierce, Provincial Grand Master shows that Bros. Graham and Kerr were members of Shamrock 448 and Bro. Blanchard, a member of the Dunedin Lodge, No. 931, English Constitution. In the first minute book there is a letter from the Provincial Grand Secretary to Bro. Graham pointing out that all chartered members must be registered and financial in their respective Grand Lodges. Both Graham and Kerr were members of the old Shamrock Lodge and this was in considerable arrears to Grand Lodge. There is no record to explain how this difficulty was overcome, however the problems must have been resolved satisfactorily because on 3rd November, 1881, the members assembled at 7.15pm and were introduced to a Lodge in the First Degree presided over by Bro. Julius Hyman, Past Provincial Senior Grand Warden. Bro. Harvey, District Grand Master in the Scottish Constitution consecrated the lodge by sprinkling corn and oil, Bro. Nathan, Past District Senior Warden of the English Constitution, wine, Bro. Caldwell, Grand Steward. in the Scottish Constitution, salt. The Brethren then saluted the Lodge following which Bro. Graham was installed as the first Master and his Officers were invested. After being Master for three months, W. Bro. Graham resigned his position as Master to take up the appointment of District Grand Master, English Constitution, despite the fact that he had never held office in an English Constitution lodge! Originally named “St. Patrick’s Lodge”, the minutes of 1884 are headed “Lodge of St. Patrick” although the monthly circular was still headed “St. Patrick’s Lodge”. With a change of Secretary the minutes were headed minutes of “Lodge St. Patrick”. There is no record to show that the name was officially altered but just appeared to be the choice of the then Secretary, so the title of Lodge St. Patrick has been used from 1885 until the present day. Early minutes show that the brethren endeavoured to put into practice many of the tenets of the Craft. As far back as 1885 a series of lectures on freemasonry were given. Requests for assistance from needy brethren of any Constitution were frequent, there being no Benevolent Funds and the records show that deserving cases were always assisted either by grant from the Lodge funds or by a special collection amongst the members.

On 8th February, 1899, a special meeting was held at which it was announced that that Grand Lodge of New Zealand was being recognized by the Grand Lodge of Ireland. This meant that members of Lodge St. Patrick could receive and visit lodges of the N.Z. Constitution. On that night a vote was taken whether to remain Irish or change over and it was decided unanimously to remain under the Grand Lodge of Ireland. At the installation of 1900, for the first time all Constitutions were represented, by Provincial and District Grand Masters. This custom continued up to the end of the Second World War (1945) for all installations of all Constitutions.

Over the years Lodge St. Patrick have had many keen and loyal members: men like the late W.Bro. Deane Sharp who regularly walked from Carey’s Bay (some 14 miles) to attend his Lodge, or W. Bro. Alex Clark who, when during the World War II Lodge St. Patrick found going hard, took office and became Master in his eighty-first year. Men, who in good times and difficult times, have remained loyal to the tenets of the Craft and all that Freemasonry stands for, so that even today, Lodge St. Patrick is still a force in this district and a much valued Lodge of the Provincial Grand Lodge of New Zealand under the Grand Lodge of Ireland. Despite being the furthest Lodge from Dublin it remains loyal and committed to the Irish Constitution. 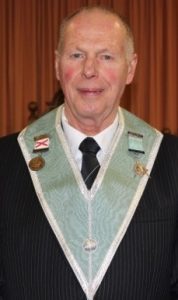 Coronavirus Update
In view of the latest Government advice on the COVID-19 (Coronavirus) all Irish Masonic meetings and gatherings are suspended indefinitely throughout the Province of New Zealand.
Continue to maintain high personal hygiene. Please call others regularly, especially those that might not have family, our older members and our widows. Those that are in Retirement villages and Rest homes are now largely in lockdown and will welcome your calls.
Please follow official government requirements and stay safe. Follow your masonic teachings and be cautious. I wish you all well.
Fraternal regards
RW Bro Andrew McGregor
toggle
Toogle Down